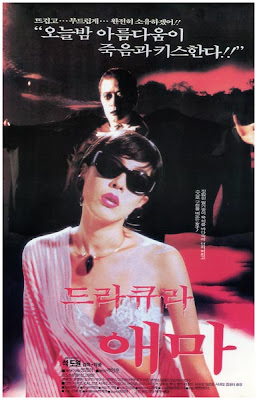 Any films that bare the “Aema” title is always a curiosity, that’s why director Suk Do-won (Aema Buin 4,5,6,7,8 and 10) decided to make a move toward the horror and fantasy genre. He quite succeeded in mixing the exoticism of Korean beauty O No-a (Aema Buin 10) with the western lustful-horror myth of Dracula, which is actually portrayed by regular Aema Buin actor, Won Seok.

The story is about Hyun-woo, a computer geek who while working at night on a video project is suddenly thrown into a world of dreams and illusions (with the help of a CD he found on the beach) where he meets with the beautiful Aema (a new servant of Dracula himself). She then tells to Hyun-woo about her past where we discover she was savagely beaten by her boss and later gang-raped in a car by some delinquent rich kids. Through a series of spiritual illusions, Hyun-woo witnesses the beautiful Aema tracking down those who abused and killed her. Will Aema take her revenge and finally erase all those bad memories that are encrypted on that CD-Rom?

Some elements almost remind me of Hisayasu Sato's work, such as the use of some audio/video technology (here a computer and CD Rom). Visually, Dracula Aema is similar to the rest of the series with a good sense of framing and playful use of light, for example the evil presence is always manifested by a neon green aura, which makes the whole scene sexier. It is also, refreshing to see Won Soek again in an Aema movie but this time portraying the enigmatic and lustful Dracula. This is perhaps the best Korean-style personification of the western myth.

Cteve
Movie watcher always on the lookout for more strange or rare movies. If you have any suggestions or wish to trade films, write me: unknownkino@gmail.com